Revised, expanded, updated, the new 2018 Broadway Musical History Subway Map celebrates collaborations across the history of musical theatre. Since it’s original inception in 2008, the map has provided musical lovers around the world hours of enjoyment. The print has been for sale on Etsy since Black Friday, 2018 and has more than recovered the initial investment.
This map was designed as a tool to help students learn about musical theatre history. At first I wanted to create a database of songs that would help auditioners find good audition songs. You would enter information about the part you are trying out for and it would re- turn songs that are appropriate. I tested the idea in a workshop in which I worked with students to develop a repertoire of audition materials, asking them questions about what parts they would want to play and then giving them appropriate songs based on my criteria. But what I realized was that while the students left with a trea- sure chest of song choices, they didn’t actually learn how to pick songs for themselves. Rather, they just asked me to tell them and didn’t learn from watching me pick for them.I went back to square one and reflected on how I was able to pick songs. What it came down to was 2 things: I’m fairly well-versed in musical theatre history and the act of choosing good audition songs came down to drawing a connection between the show you’re audi- tioning for and the song you choose to sing.I looked at one of the first questions I ask myself when choosing audition material: what other shows did these creators work on? So, the project changed courses and become about learning the history as a series of connections.​​​​​​​

Some Background
When I was 5, I sat down at my grandparent’s piano, took out one of the old lesson books, and started trying to teach myself how to play. When I was 6, my parents took the hint and signed me up for lessons with Mr. Diaz He was also the choir director at my school and he put me in his annual musical. From that point on, I was obsessed with opera, musical theatre, broadway, acting, and other things like that..
I didn’t have any friends. Did you know any fourth graders who played piano, listened to opera, and knew about Sondheim? I was a loner. So, I started to hide some of the passion. I’d be belting out show tunes in my bedroom but in school I’d just be very quiet. But I got older. I grew up. I found the people that I connected with. I even enjoyed a brief career through my twenties as a professional pianist, piano and voice teacher, and musical director. It was the lens through which I spoke of design in my graduate school thesis which was an exploration on the connection between the designer and his or her audience or users.
how i got here
My time as a designer started with theatre posters and I hope to keep that practive going for a long time. I’ve always kept a healthy freelance practice and a lot of that is focused on the arts and non-profits.
Anyway, I was in school: MassArt, graphic design. In your last year you do your Senior Degree Project and I kept the theatre was still a strong theme in my work.
I made this.

A Musical theatre tube map.
The warm colored line is a different directors and choreorgraphers, and the cool color lines are composers and lyricist. The stations are the shows they worked on. The lines meet at the shows that people worked on together. The concept is pretty simple.
This is for lovers of musical theatre. This is for people who dream of Broadway shows. It was original intended for students of theatre but I’m finding the audience includes many former students as well.
Anyway, it got a little traction. I was even published in a book: Strange Maps. So that was pretty neat.
As time has passed, things have changed. I don’t do any theatre any more. I don’t even play my piano any more. The role I play today is third audience member from the left.
But the map has always stuck with me. I’ve always wanted to attack it again and get it ‘right.’
process
One evening in September, my husbansd and I were watching one of the Housewives shows and I just started doodling. I just drew. And redrew. And redrew. It grew organically just like history did. I started with the people and shows I had in my head. Rodgers and Hammerstein were my starting place for both versions of the map. They form a solid backbone for the visual. I find this especially appropriate since they are the people generally regarded as the creators of modern musical theatre. Along with Agnes De Mille, they changed the artform of musical comedy with Oklahoma! and introduced musical theatre to the world.
Within a few hours I had a draft. And I kept working on it. I kept adding shows and lines—venturing deeper and farther than I had with the first one. I kept printing it out so I could see it full. And so that I could proof it as I went. It was already getting dense and I was already losing sight of the whole thing.
Enlisting the help of friends and family to proofread it, I promised each of them a free print of the map when it was done. Some people even printed it out and marked it up and mailed it to me.
I had piles of handwritten notes. At a certain point it looks like I was an obsessed investigator hot on the trail of a mad serial killer. To discover the right people to include, I returned to my personal reference library, especially the work of Ken Mandelbaum and Ethan Mordden. 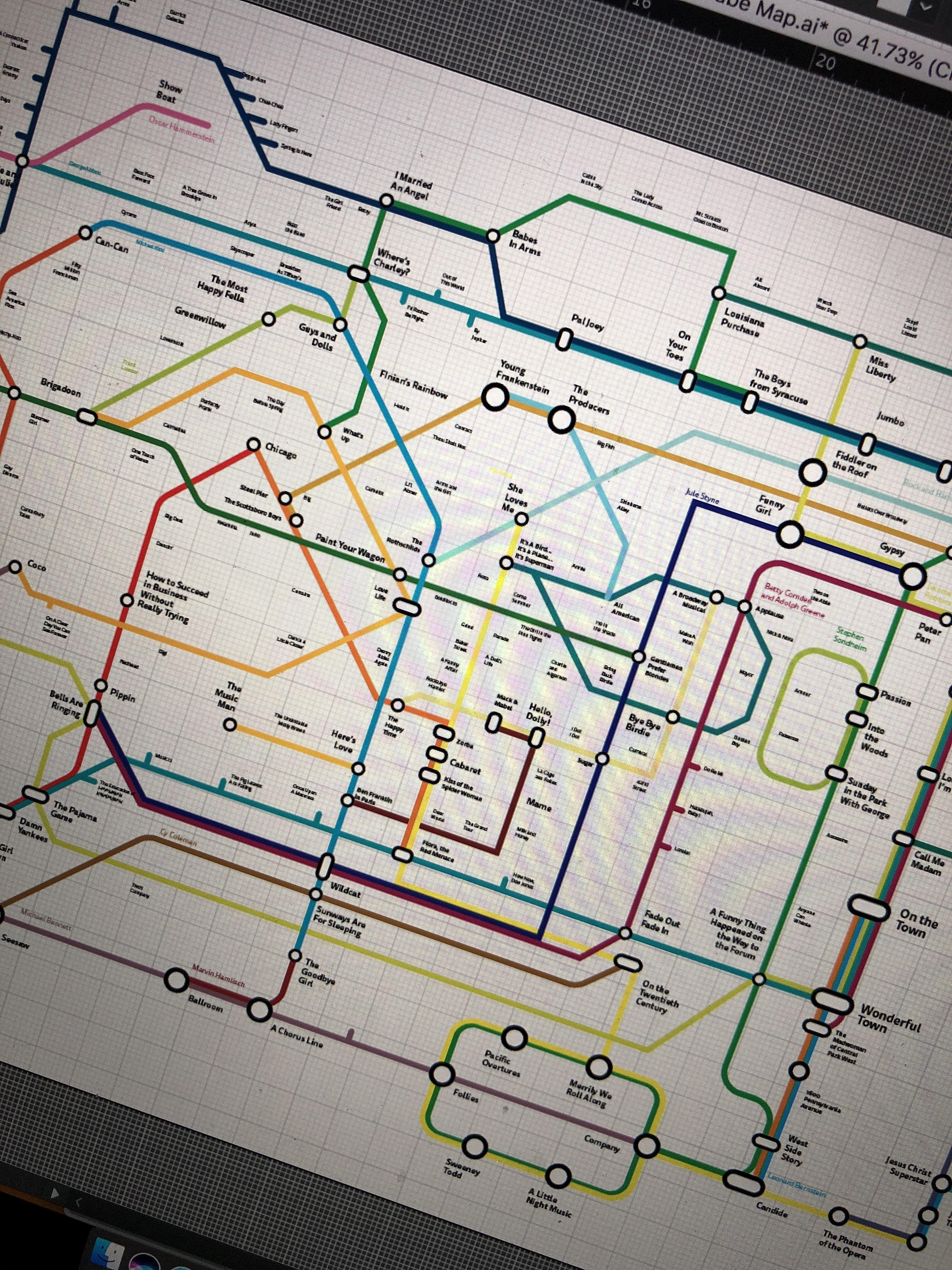 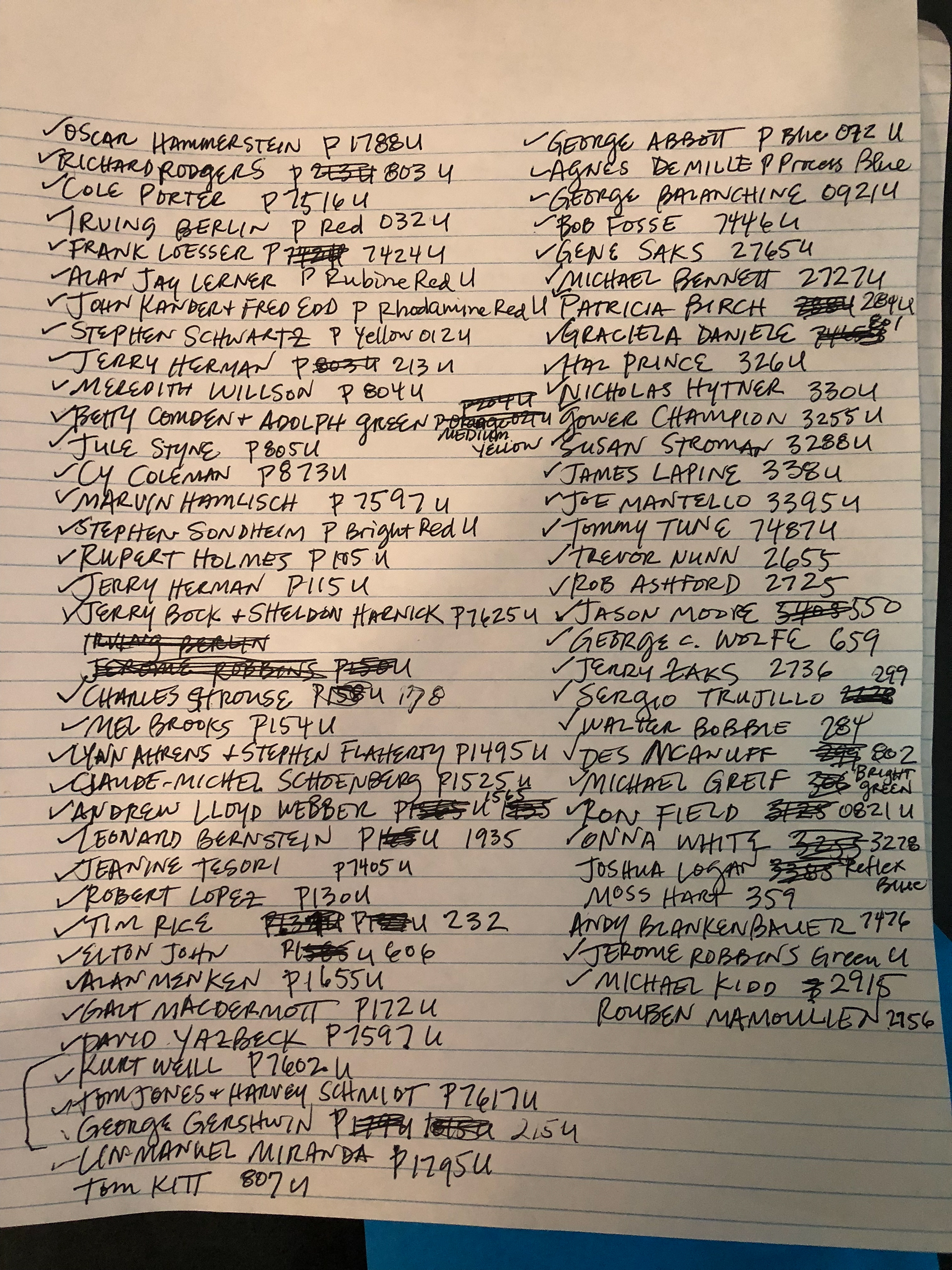 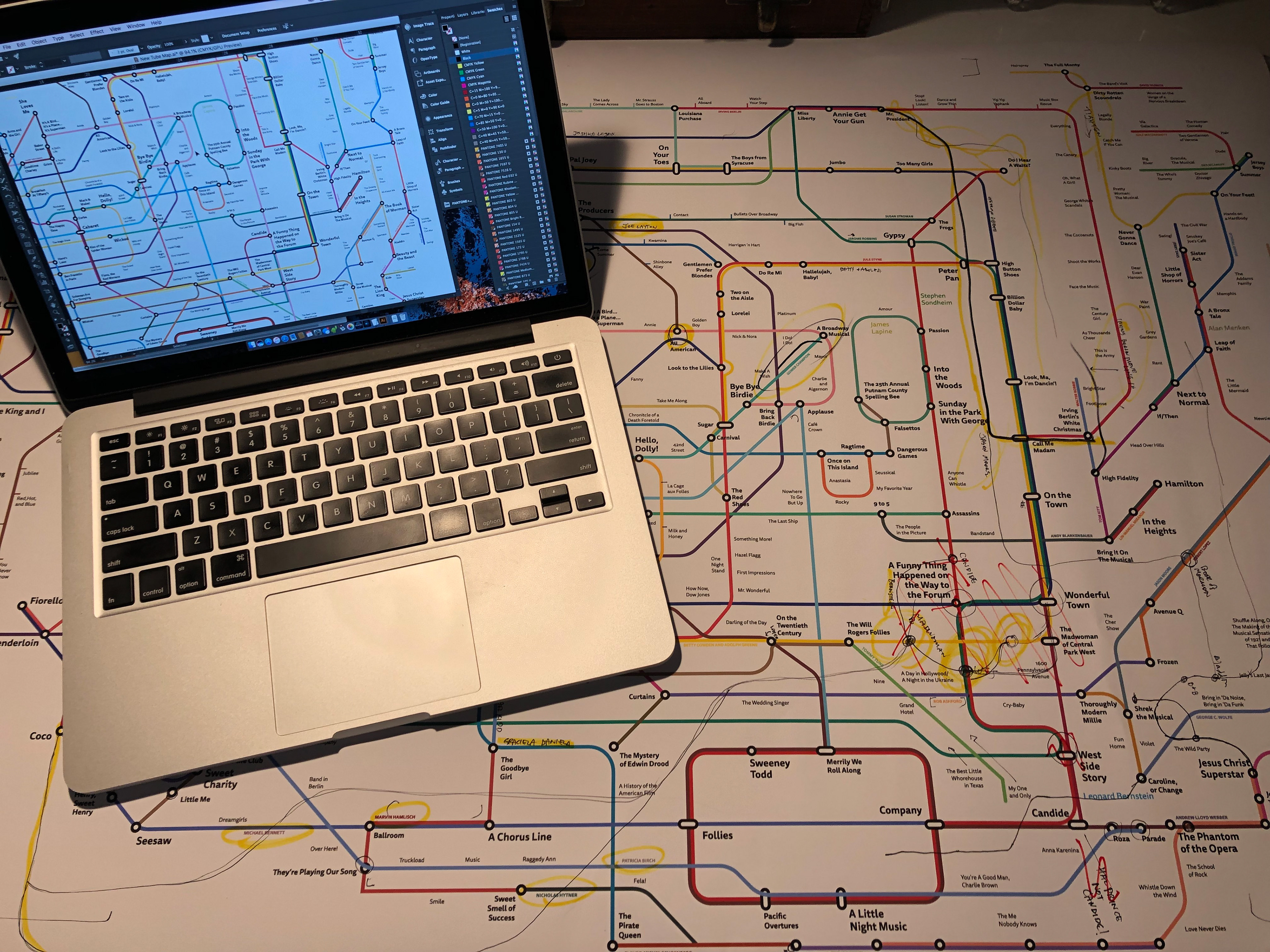 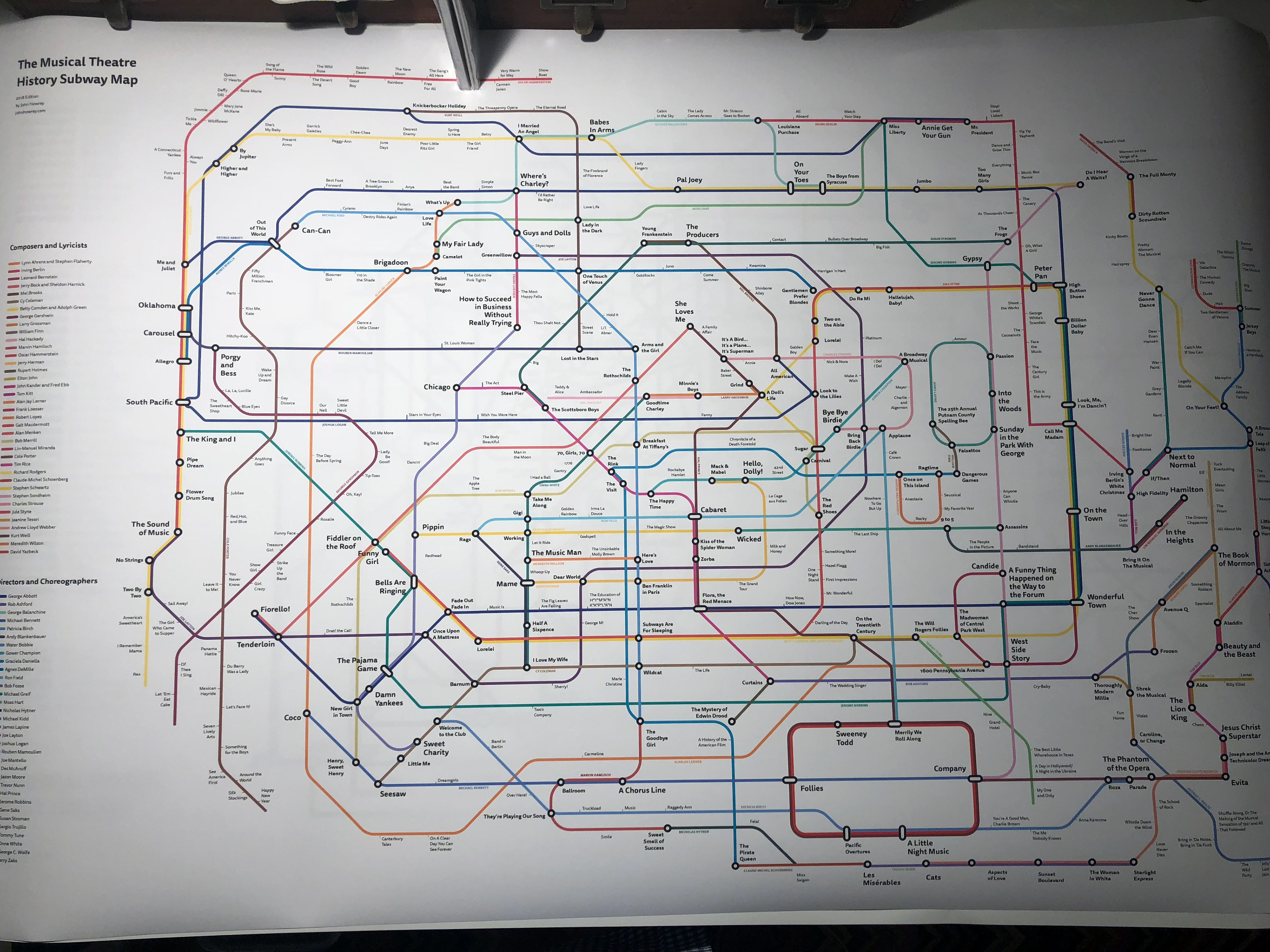 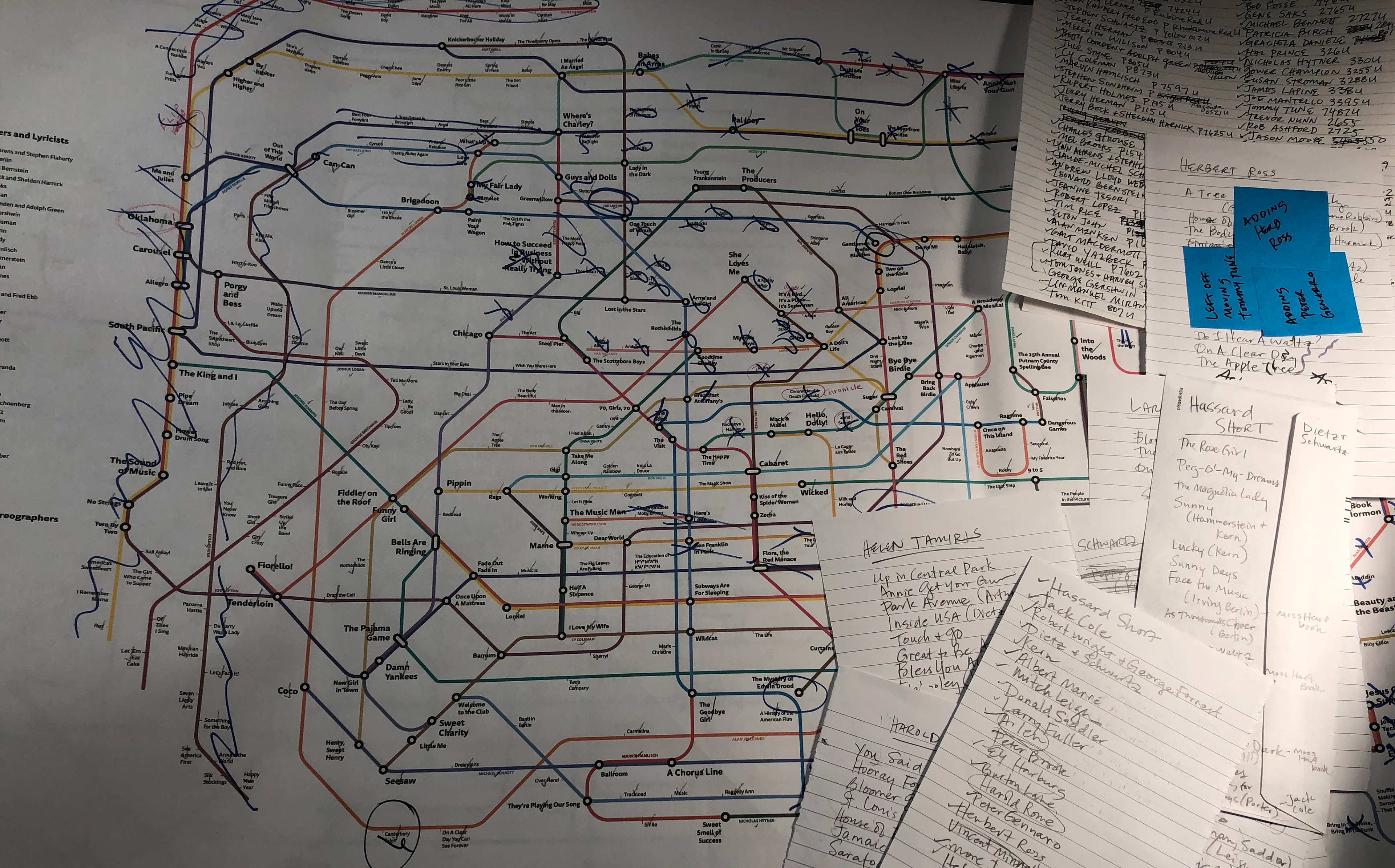 the big step
Even though I was scared that some of the content was inaccurate, I was still thrilled with the visual. The colors were working. The typography was strong.
So I took the leap and declared that I was done. I also made a website. You can’t really do much yet. But you can zoom in and out and pan around. You can open up the key.
Eventually I’d like to make this even more full. Learn about each of the shows. Listen to the songs. See some pics. Read a synopsis. Learn about the people. Etc.
I love the visual of the relationships of these people as they wrote Wonderful Town and On the Town. This collaboration created to of the most important piece of theatre of the 20th century. 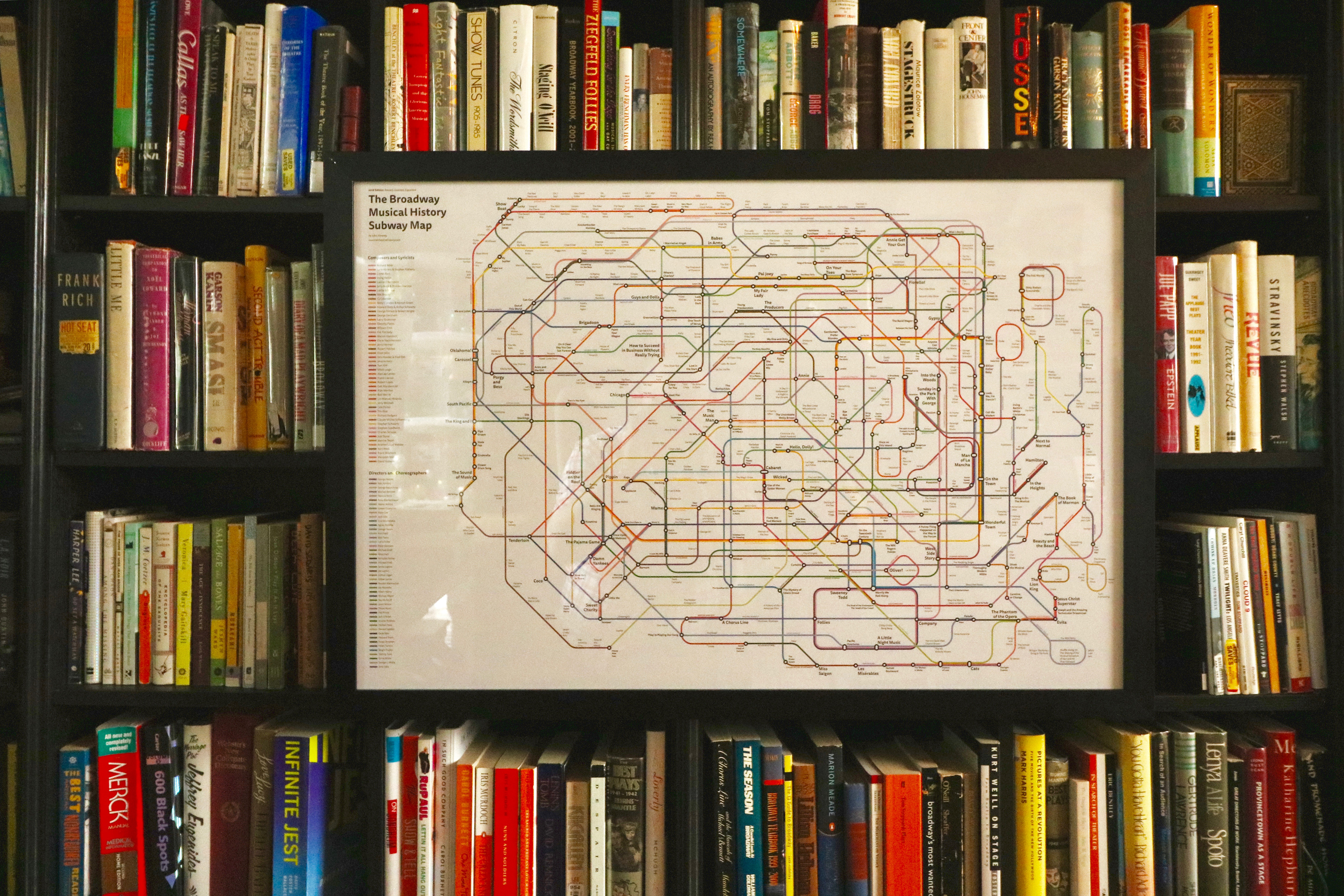 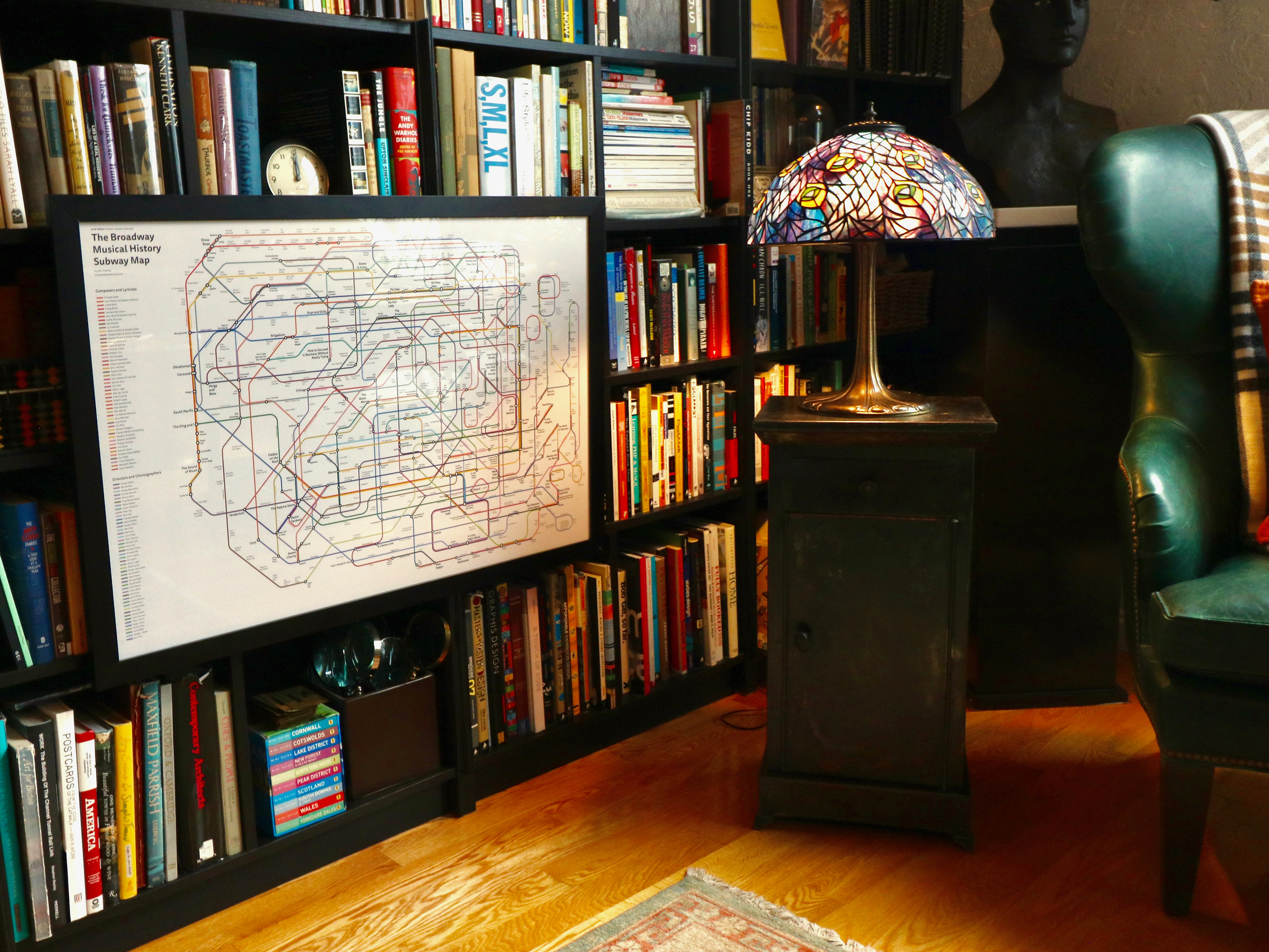 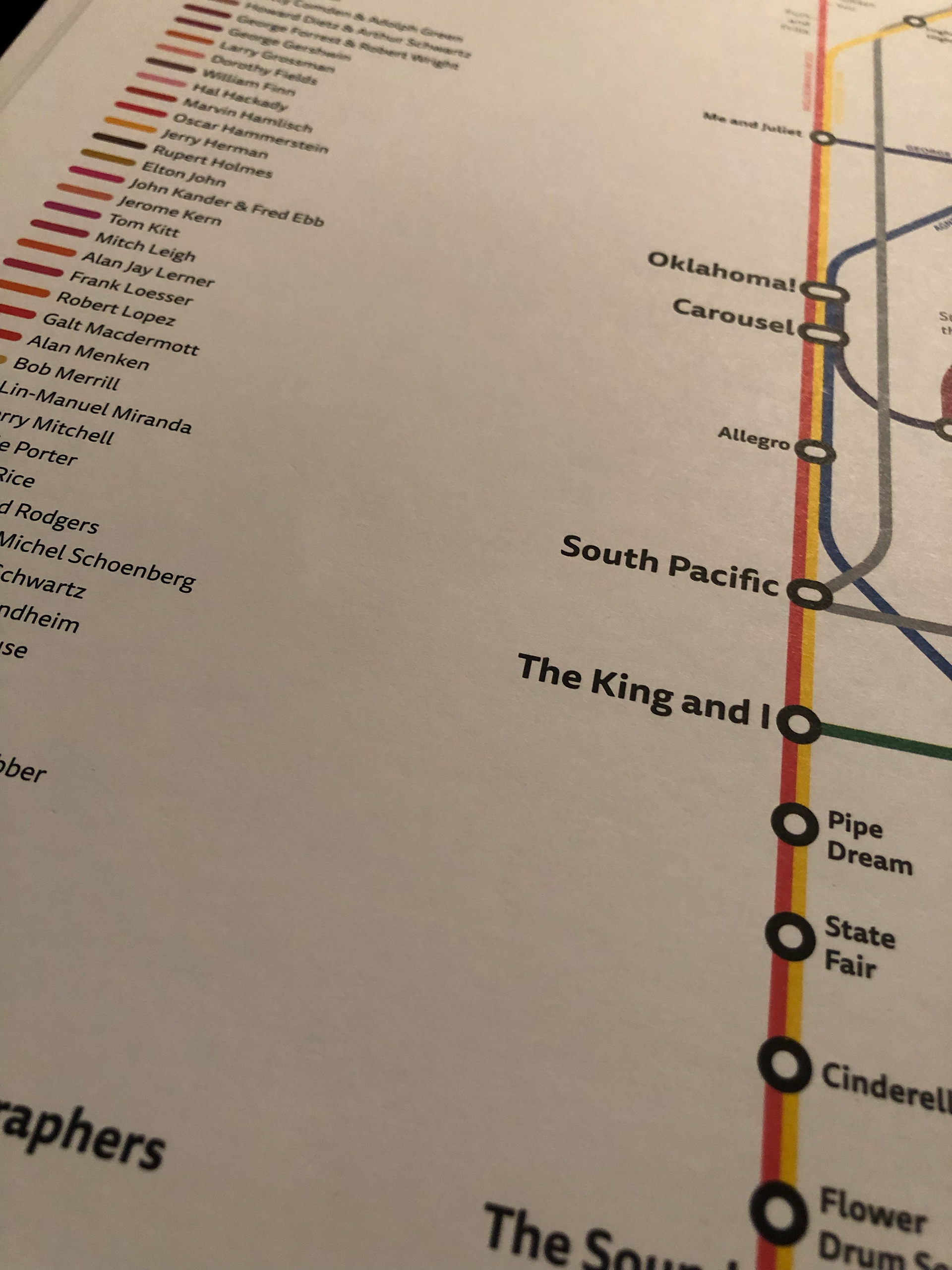 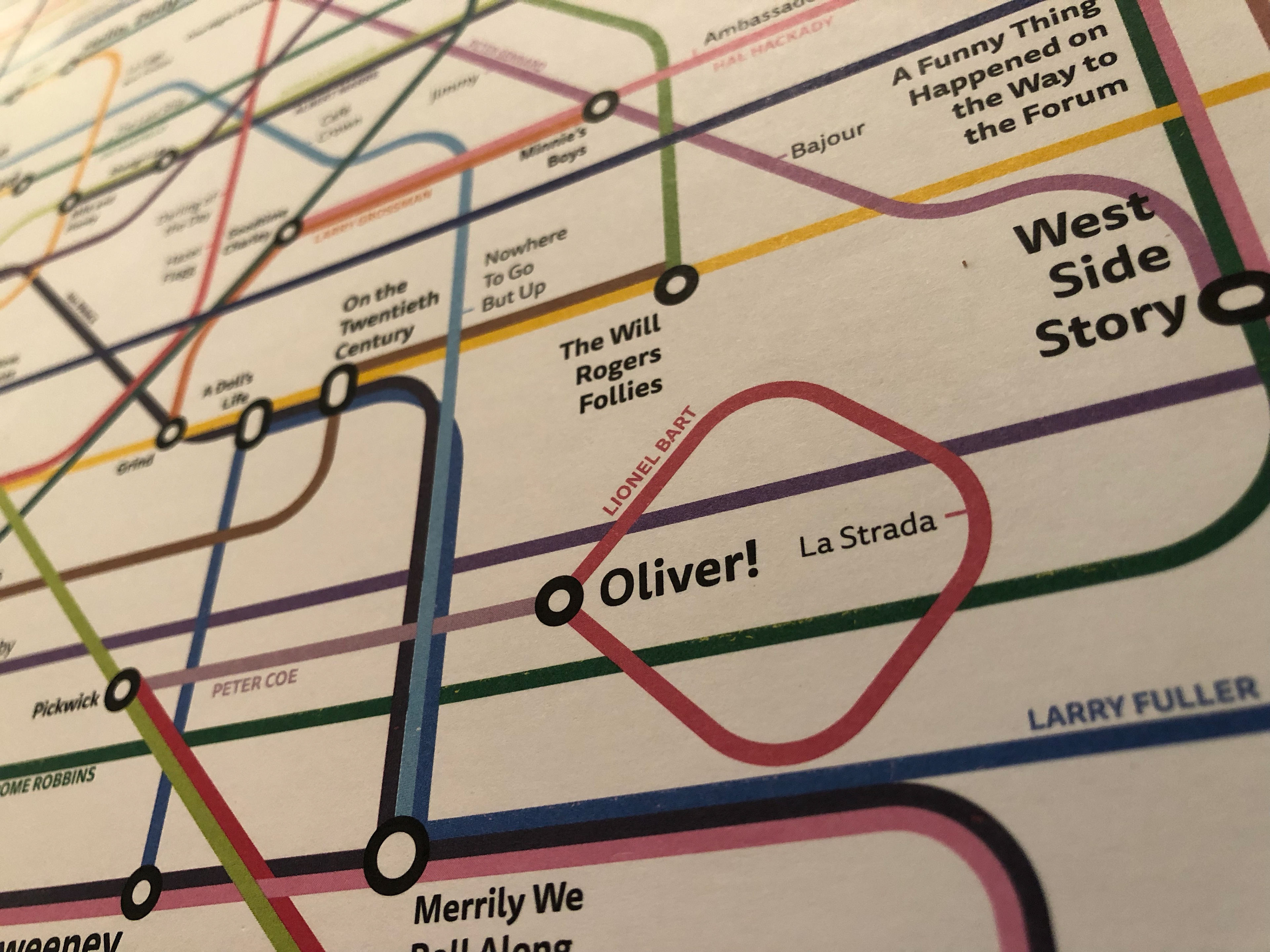 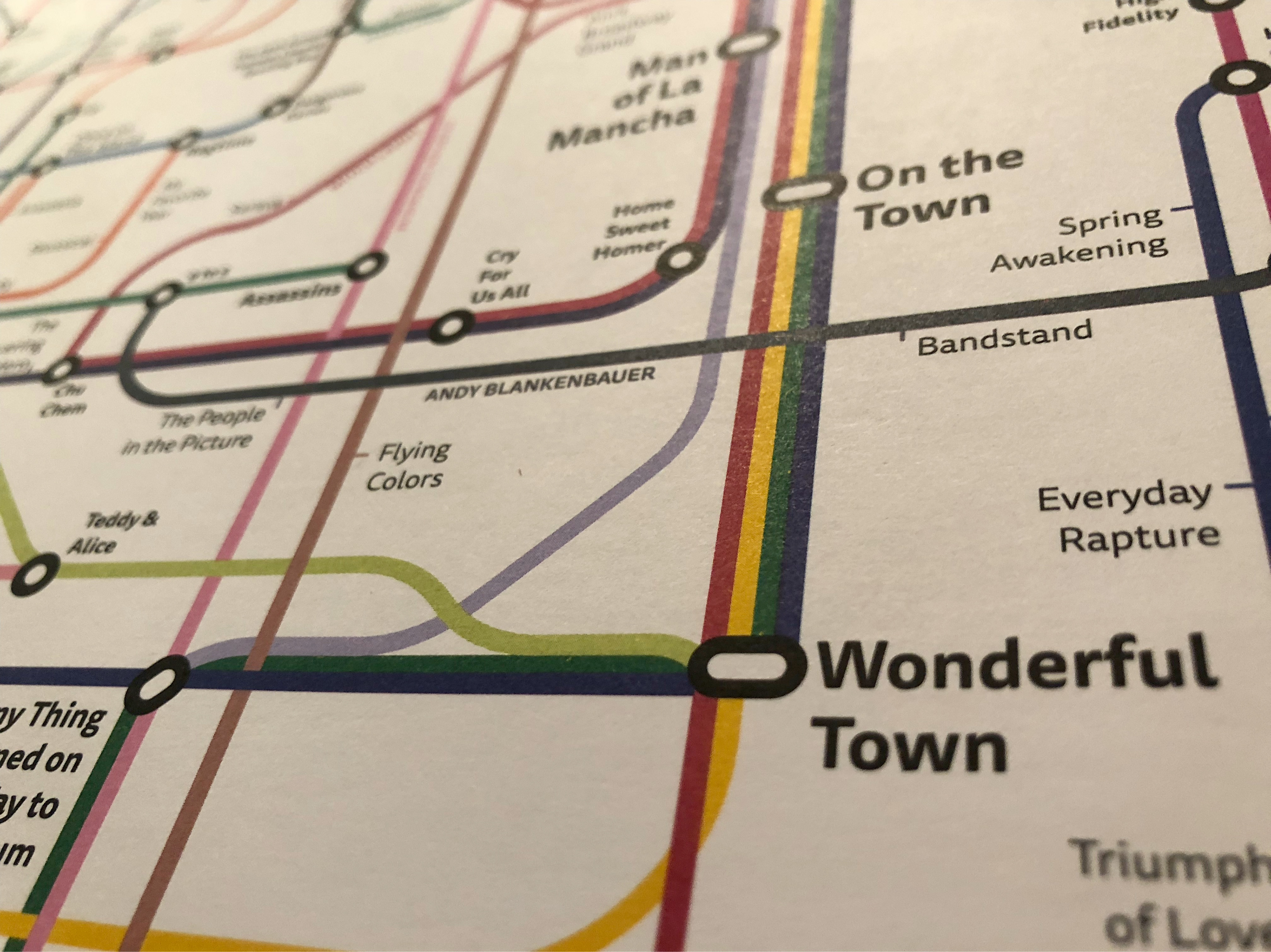 finishing the hat
The smell of a hot-off-the-press offset print is one of the best smells in the world. And to know that that smell was coming off of my creation (no client, no employer, just me) made it kinda extra sweet.
I have launched Drama Nerd Designs with an inventory of 500 maps. On Black Friday of 2018, the map went on sale and I made all the money back on printing within the first 3 days.
And when I think back to that little boy belting out show tunes in secret, I know he would be so excited to see the types of things he’d grow up to do. And he’d embrace his quirky little passion a bit more fully.